The concept of goods and services tax (“GST”) is not new to the world. About 160 countries have opted to adopt GST as a tax mode. France was the first country to introduce this tax regime in 1954. Some others have dual-GST model, like Brazil and Canada – a structure where both Federal and State have powers to levy and collect taxes. India’s GST is essentially under five brackets: 0%, 5%, 12%, 18% and 28%. Its top bracket (of 28%) is the highest rate and exceeds that of Argentina (27%). On average, it is around 18%. More developed economies have rates set between 19-20%, which they use to support social services and benefits. 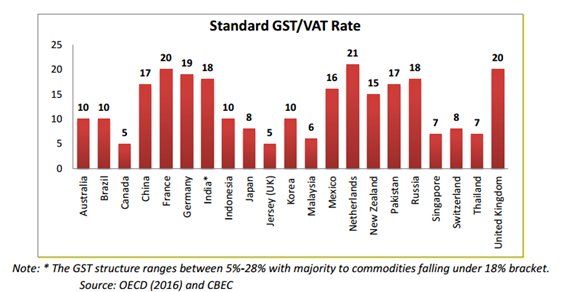 The problem of GST worldwide is that it is regressive in nature – the lower income bears a higher tax burden than the higher income. The other problem is that it leads to a growing shadow economy and their structures: 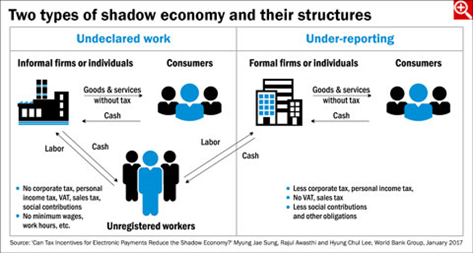 Germany has a shadow economy of about 15% per cent of the real economy for decades.

To evaluate GST’s performance, we should examine five indicators (implications):

·       Consumption (whether consumption is reduced which impacts GDP);
·       Production (should be neutral);
·       Inflationary pressures (could increase cost of living);
·       Compliances (creating a “Big Brother” society?  Oversight/ surveillance which impacts business sentiment); and
·       Tax buoyancy (whether tax revenues increase in the medium to long-term)

The performance of a Government has to be measured by the above indicators and not just whether it is 28% or 6%.


Recently a friend had the following questions on impact of GST in Malaysia (27 Oct 2017).

“How does Malaysia measure up on the five criteria – consumption, production, inflation, compliances and tax buoyancy?”

From a Government perspective therefore, the tax is useful and increased Government revenue substantially in the immediate term. From a consumer and retail perspective it has negatively impacted disposable income and turnover of retailers respectively. From the producers’ point of view, it is somewhat neutral to negative as lower consumption impacts production but hopefully this remains a short-term phenomenon.
Posted by MyMPCA at 12:00 1 comment:

In fundamental analysis, besides looking for the potential earnings growth of a company, one has to ensure that the company’s financial position is healthy.  However, analysing a company’s financial statement is not an easy task; one has to go through many annual reports, read the notes and understand the details of each entry in the financial statement.  Often, the process is time consuming.

In 1999, Dr. Messod Beneish, an accounting professor at Indiana University’s Kelly School of Business published a research paper called “The Detection of Earning Manipulation”.     He introduced a simple analysis method, the Beneish M Score, to detect potential financial manipulation by using information that is readily available in the financial statement.

The table below, shows the M-Score for various companies in Malaysia.

All the companies in the table showed to be normal under the M-Score test except for FGV in 2015.  But in 2016, FGV reverted to normal.  Perhaps, a more detailed analysis of FGV’s financial statement may be required. 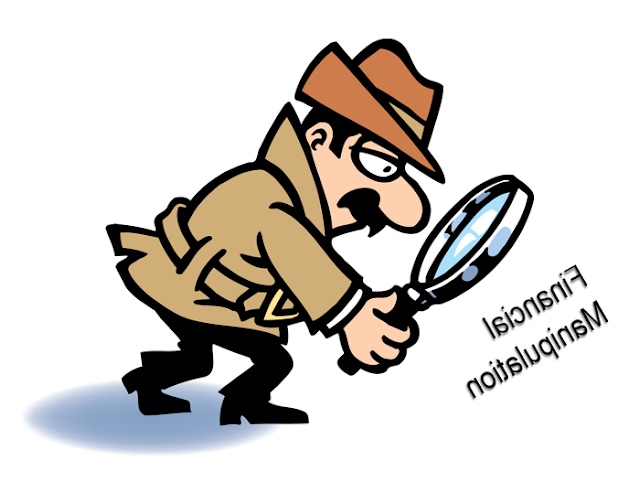 At a pre-Halloween party, I was appointed the shadow Minister of Finance for a “virtual” nation. My job entails how to address the following:

These are some of the main concerns, amongst others.

As a technocrat, my new appointment makes life difficult because of competing forces in the political maelstrom! Be that as it may, I am determined to lay down my best for the “virtual” nation.

Many are troubled by exchange rate fluctuations. As an immediate step, the Overnight Policy Rate is raised by 1.0% to improve the exchange rate.  We need to reward savers as much as investors. There will be an outcry by those in business who see this as a cost increase which may impact GDP growth. We will take that challenge. Imported inflation is reduced, currency is better reflective of our standing, and people have confidence going forward. Creeping deprecation is like being in a haunted house with “creepy” ghosts.

For 2018 and 2019, we are reducing GST to 3%. Thereafter, we will re-examine consumption, inflation and tax buoyancy. This will stimulate growth, increase consumption and reduce inflationary pressures.

Our fiscal debt which is high, will first rise to 60% of GDP before reducing to a manageable 40% by 2020 and beyond. Legislative exemption will be sought for the increase. An additional 5% or $50 billion will be injected into the economy as a stimulus to build new district hospitals, TVETs (in education) and social services. Graduates in medical, education, social sciences are to be engaged for better services to the rakyat.

Our students in public universities will have their tuition fees waived for their respective courses. This is an investment in the country’s long-term future.

Household debts and the broad property sector have been a “drag” on the economy. I propose that both these areas are centralised under a new agency with the Central Bank as the custodian. Commercial banks have to “sell” to this agency their portfolios in the broad property sector to generate liquidity and lend fresh money for affordable housing. Each state will establish new housing development agencies for the middle and lower income strata. Affordable house cost will not exceed six times the average earnings of a household.

Private sector remuneration at the top end will not exceed 20 times that of the lowest employee in an organisation. The “excess” wage will be taxed at a higher rate of 30%. Inequalities have to be addressed if societies are not destabilised. With many large corporations having pre-tax profits in excess of $1 billion, it may be timely for wages of the lower level employees be raised. Tax rate will be reduced to 20% for those companies improving salary scales in excess of 10% but below 15% for 2018.

A new Corruption and Reconciliation Commission is proposed to provide an avenue for those involved in such practices. This Commission is to function for a period of three years, after which it will focus on integrity in private and public sectors.

Graduate unemployment has to be tackled at source. In the short term, a period of internship with companies is proposed. These companies will receive double tax relief for every graduate employed from the registered pool of unemployed graduates. Job centres/placement centres are to be established in every major city. In the longer term, graduate intake at university level must reflect demand conditions in the economy. A major review of courses will be implemented at university and college levels. Schools will be permitted to use English as a medium of instruction from Form 3. This is an option and will improve marketability of graduates.

To enhance productivity and provide innovation, an R&D Fund of $10 billion for application research is to be established.

To drive down health costs, generic drugs and production of the same will be encouraged. In the short-term, import of these drugs will be tax free (including GST). This will hopefully bring down costs. For the ageing population (above 65), all medical costs are borne by the Government. Purchase of medical devices such as walkers, wheelchairs, beds for assisted living are reimbursed on a one-time basis for each senior citizen.

To help reduce global greenhouse effect, we will refocus our energy sources to renewables. A special renewable fund scheme will be announced shortly to increase usage of solar and other sources of renewable energy. All gasoline driven cars will be banned in 2035 to reduce pollution in cities. Subsidies will be introduced for electric and hybrid vehicles.

Growth is driven by the private sector, and to enhance their ability to move forward, a structure similar to that at Central level is to be instituted at each state. The Government’s job is to facilitate. And this has to be in an efficient manner.

Our focus for 2018 and beyond is GDP growth of 6% and above. This together with an enhanced quality of life for the ordinary person. It is a right for everyone to own a home, a car and a business or have a stable income stream. We want this “virtual” nation to live up to its name, and truly reflect unity in diversity.

Finally, this is not a trick or treat event!

(The above is a figment of unbridled imagination (or the lack of it) of the writer. It does not represent any nation in the past, present or future). 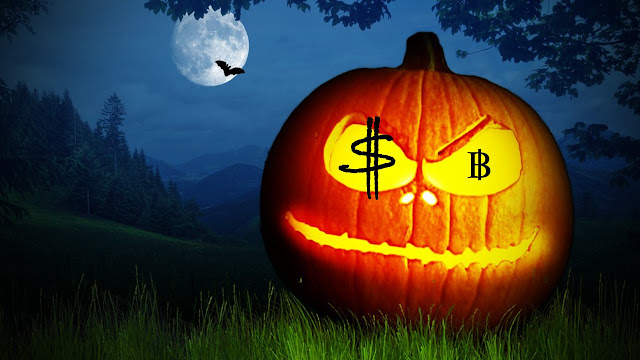 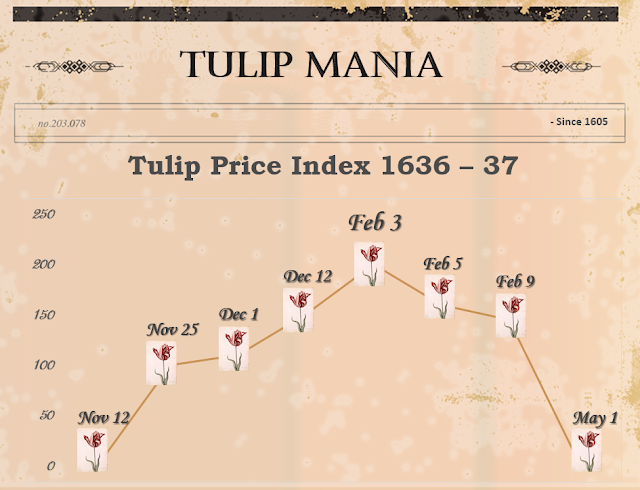 From Tulip Mania (1637) to the Subprime Crisis (2008), each market crash has cost investors a huge fortune.  Inevitably, it also has led to a period of economic recession/ depression.  There are many theories that attempt to explain the causes of the crash but not many could predict the crash ex-ante timely. 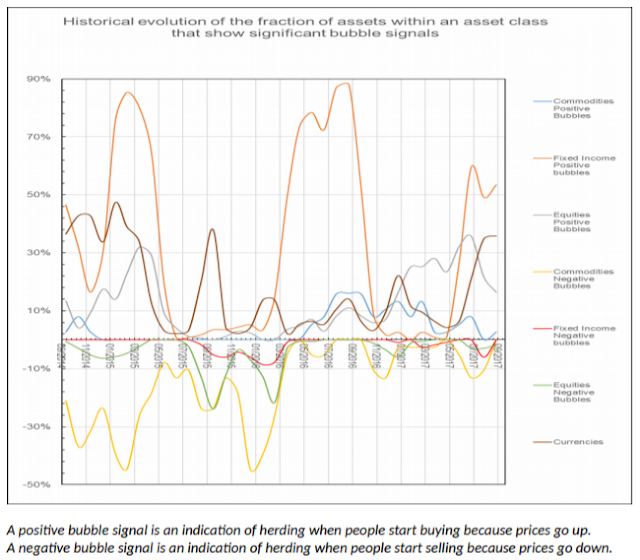 We love to wait for his October report to see where the equity market is heading!
Posted by MyMPCA at 12:00 4 comments: