In our previous article dated on 25 August 2017 (Read more here), Ringgit Malaysia (RM) was forecasted to be trading between 3.80 to 4.18 in 2018, using regression analysis against international oil price.  At that time, RM was trading at 4.28 to USD.  The following chart shows the forecasted range published way back in 25 August 2017. 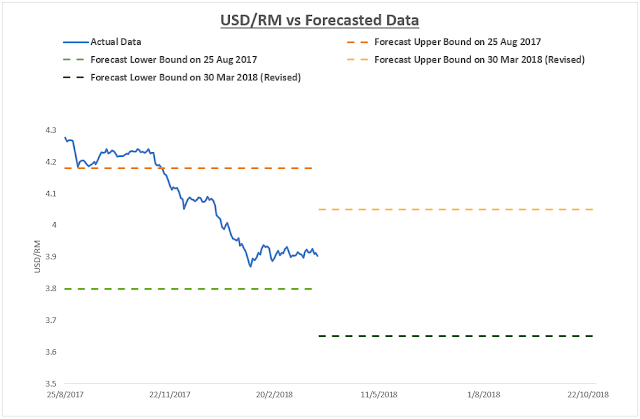 The actual exchange rate movement is inline with the forecasted data, underpinned by higher oil price and subdued concerns from a series of negative news since August 2015.

In a February 2018 poll of 15 investment banks surveyed by The Wall Street Journal, the Brent oil is expected to trade at average of USD 62 per barrel for year 2018 (Read more here).  Using the oil vs exchange rate regression plot in previous article (Read more here), the exchange rate is expected to trade between the revised forecasted band of RM3.65 to RM4.05  for the next six months up to October of 2018, with increased volatility due to the following factors: 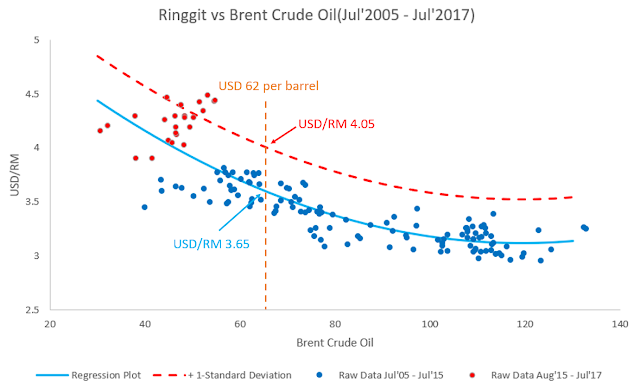 Essentials of Tariffs and Trade Barriers

International trade increases the number of goods that domestic consumers may choose from. Through increased competition cost of these goods should fall. Free trade for all its benefits is not widely accepted by the Trump presidency. The President has been on a anti-trade warpath from his campaign to his election. He followed up that with tariffs on solar panels, washing machines, steel and aluminium. As a businessman, the speculation is the President is using the tariff card to procure better trade deals with Canada, Mexico and even Europe. With China, it is perhaps, to persuade China (as suggested by Martin Feldstein of Harvard University) to abandon its policy of “voluntary” technology transfers imposed on U.S. firms for goods exported to China.

A tariff is a tax that adds to cost of imported goods and these are “rightfully” used to protect infant industries in developing economies. The five top reasons for tariffs to be implemented include:

There are several types of tariffs and trade barriers that a government may employ:

No one? In the short term, higher prices reduce consumption but governments will see an increase in revenue. In the longer-term, there is a decline in efficiency, market share is lost eventually, the businesses suffer losses and a foreign entity takes over on favourable terms (e.g. Proton). For the government and people, a perpetual subsidy mentality leads to budgetary deficits and less disposable incomes.

Free trade benefits consumers with better choices and reduced prices. Protecting industries for a limited period may be helpful for a developing economy. But the problem is “infants” seldom want to be weaned-off their “milk”. So it is a delicate balance between pursuit of efficiency and providing employment to a protected business/industry.


Source: The Basics of Tariffs and Trade Barriers by Brent Radcliffe (www.investopedia.com) 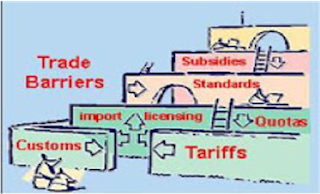 Exponential Triple Smoothing (ETS), is another time series forecasting model that comes together with Microsoft Excel 2016 (Read more here).  It can be viewed as a subset of ARIMA model.  The ETS function in the Excel 2016 is very user friendly.  The forecast model can be generated within a few clicks.  The following chart shows the Malaysia Rubber Production forecast using the forecast function in Excel 2016. 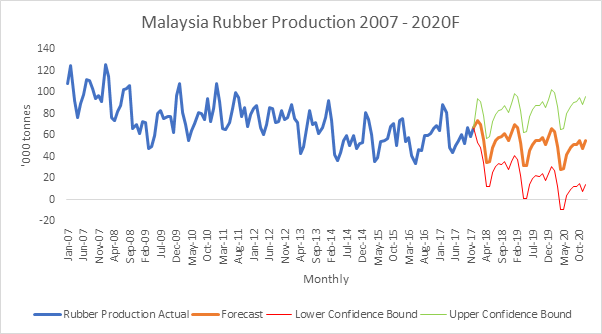 The older version of Excel could only forecast using linear regression method.  The ETS algorithm in Excel 2016 is capable of studying the seasonal behaviour of the historical data and reflects them in the forecasted output.  The upper and lower confidence bound are basically two standard deviation from the mean.  In other words, we have 95% confidence level that the forecast prices for rubber production will lie 2.5% either way of the forecast.


From the above, it may be observed that for the years 2018 – 2020 (forecasted period), rubber production in Malaysia will continue to trend lower from decade ago, at a slower pace.  In addition, the seasonal lowest production months which usually happen during March-May is also “captured” by the ETS algorithm.

The grand issue for 2018 is the inward-looking policies from the U.S. Withdrawing from TPP and imposing tariffs on steel, aluminium and solar panels defeats increased world trade as others too can impose tariffs on the U.S., especially in agriculture and electronics. Then we have geopolitical tensions in Syria, Iran and the Korean peninsula. Further, climate has not been kind – which with global warming will impact on output and productivity. So to promote free and fair trade as IMF suggests will not be easy with an unpredictable U.S. President. Then there is this dire prediction of U.S. stock markets crashing by 50%.

All that sounds really gloomy! But being prepared for the worst and hoping for the best is the sure way forward!

A 2007 study showed that the most economically free countries in the world are Hong Kong, Singapore, Australia and the United States.  But there is no such thing as a “free market”. There has never been one nor ever will be. (I could end this entry on that note). 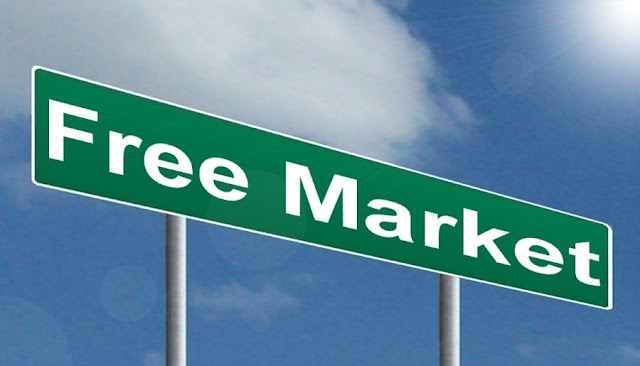 The mantra of “free markets” rings loudly ever so often after a severe financial crisis. It is unrealizable.  In scholarly debates, the concept of a free market is contrasted with the concept of a coordinated market.  Rule making institutions external to forces of supply and demand create space for those forces to control productive output and distribution.

The market is one of the many social institutions. And public goods and social necessities cannot be treated as if they are commodities produced for sale on the market. “Free market” doctrine aims to liberate an economy from government “interference”. There is no economy without government rules and institutions. All key inputs for an economy – land, labour, capital - are only sustained by government actions.

Both left and right movements today focus on “deregulation” – for the right it is to remove impediments of government; for the left, it is the scourge of all inequalities. Giant corporate and lobbyists want to maximise returns and through less market regulation and impediments to unionization, that may inevitably lead to bottomless bailouts.

We must not discuss regulation verses deregulation but what kinds of regulations we prefer: Those designed to benefit wealth or for the common good? And those rules and rights that recognise skills and talents or those that rig the game in favour of Big Business?

We have seen in Europe right-wing fringe parties gain traction. This is in response to austerity which has left growth rates tepid and unemployment high. A new course has to be set if we want to reduce the threat of nationalist and xenophobic right from getting stronger. Then perhaps we may remain between an illusion and utopia. 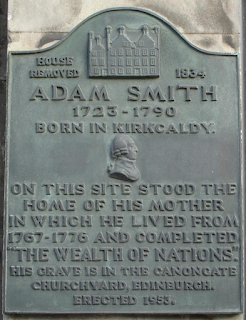