Since 2008, global debt has continued to rise. Corporate bond issuance has increased 2.5x over the past decade.

U.S. corporations now owe a record $10.5 trillion to creditors. This is in the form of bonds or loans. That’s a 30-fold increase from 50 years ago, according to a new BofA Global Research report. And the sum reported is more than 50% of US’ GDP.

The bulk of debt has been taken out by American companies with high “investment-grade” credit ratings of AAA to BBB. In this segment of the market borrowing has more than doubled in the past decade to roughly $7.2 trillion.

Half of investment-grade corporate debt, or $3.6 trillion, resides within the borderline BBB credit-ratings category, only a few notches away from speculative-grade, or “junk,” territory. A long time worry among investors has been that an economic downturn or a sustained cycle of BBB downgrades by credit-rating firms could swamp the junk-bond market.

To be sure, the outlook for corporate debt has brightened since March 2020, when the Federal Reserve’s raft of emergency funding programs was unleashed to keep credit flowing during the pandemic. This includes the Fed’s action to buy corporate debt.

Among the knock-on effects has been a deluge of capital flooding into the U.S. corporate debt sector, including from individual investors in bond funds and exchange-traded funds, as well as foreign buyers looking for yields, which have kept debt markets liquid.

The chart below breaks down the ownership of the U.S. corporate bond market as of the first quarter of 2020. 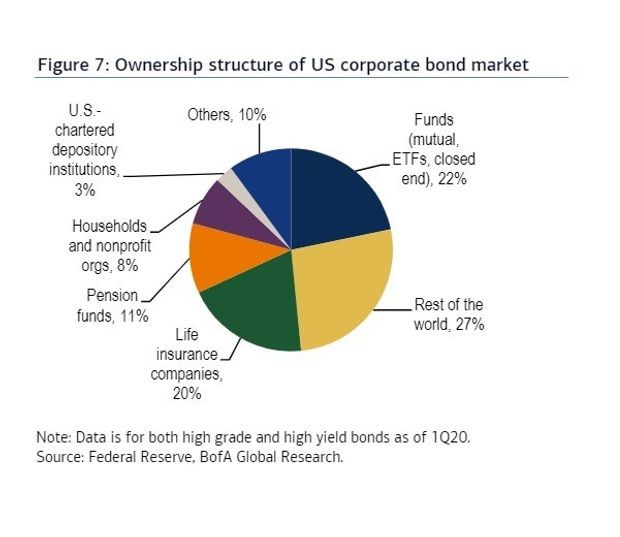 Not included is the flood of fresh debt issued by U.S. companies at ultra-low borrowing costs during the second quarter.

Foreign investors were the single largest holders of U.S. corporate debt, at 27% of the ownership pie. They were followed closely behind by funds with a 22% share, including mutual and exchange-traded funds. Another key concern of the decade’s long corporate debt boom has been the growing role of exchange-traded funds (ETFs). For the most part, the biggest U.S. corporate bond ETFs ended up performing as expected during the worst of the coronavirus-triggered downward spiral and subsequent recovery.

Global central banks have signalled to maintain spending in 2021 with ultra-easy monetary policies. The Fed is expected to keep its policy rate in a range of 0%-0.25%. The combination of lower hedging costs and higher yields is irresistible to some investors.

Jeff Franks, professor of economics at Royal Holloway, University of London, believes the U.S. government and the Federal Reserve have “grossly over-invested” in their reaction to the pandemic. But this is not shared by Janet Yellen, the new Treasury Secretary in the Biden administration. It is better to “overshoot” than “under impact” for sustaining a strong recovery. Inflation is for another day! On that score, it is possible for this “bubble” to expand further in the months to come.