The Malay Mail (23 Jan) reported the national carrier Malaysia Airlines Berhad (MAB) is expected to run at a loss and will need up to RM21 billion of taxpayers’ money for it to stay afloat until 2025.

Business paper, Focus Malaysia, reported that the RM21 billion financing is a “high-level estimate” based on a memo by owner Khazanah Nasional Berhad’s projections. This includes aircraft purchases if the airline continues to bleed money.

“That would mean the fund would need to pump in roughly RM3.5 billion a year with RM1 billion to RM1.6 billion going to operations and the rest for aircraft. Based on MAB’s own estimates which Khazanah considered optimistic, RM10.3 billion would be needed,” said the article.

The memo, based on MAB’s proposed 2019-2025 business plan was also criticised by the Khazanah committee as “overly optimistic”. The company believed its revenue can see a 4 per cent increase between 2019 to 2025 when the average growth rate was 1% per year between 2016-2018, MAB expects break-even in 2022.

Khazanah, does not see anything different between the proposed business model and the previous one. “Khazanah added that even if MAB’s estimates were accepted, barring unforeseen circumstances, the fund still needed to pump in an additional RM10.3 billion to pay off the RM5.6 billion loan from special-purpose vehicle Turus Pesawat Sdn Bhd for six Airbus 380s and finance operations. Khazanah has come to the conclusion that MAB’s business plan will not help it make the turnaround it needs based on the airline’s weak track record, execution capacity and an inability to address revenue decline.

The memo also observed that at its continued 1 per cent growth rate, MAB will never break even. In its financial year ended December 31, 2018 it had made RM8.73 billion revenue but a net loss of RM791.71 million. Now with the Coronovirus MAB will probably have a 8% decline in revenue and 30-35% drop in passengers (That's based on IATA's estimate for impact on airlines previously affected by SARS).

Below are summaries of the four bidders and their proposals:

- An RM1.12 bil cash injection for a 25% stake in Malaysia Airlines Bhd (MAB)
- An offer of revenue management and turnaround expertise
- Making KLIA an international hub

– No initial investment but a call option for a 49% stake
– Synergies estimated between RM1.2 bil and RM2.2 bil per year
– 50:50 joint venture in maintenance, repair and operations
– Commercial cooperation with daily Paris-Kuala Lumpur flights and possible expansion to North Africa and Europe

Focus Malaysia (on 3rd February 2020) made a comparison of the two deals - AAGB + AirAsia + MAB and JAL + MAB shown below: 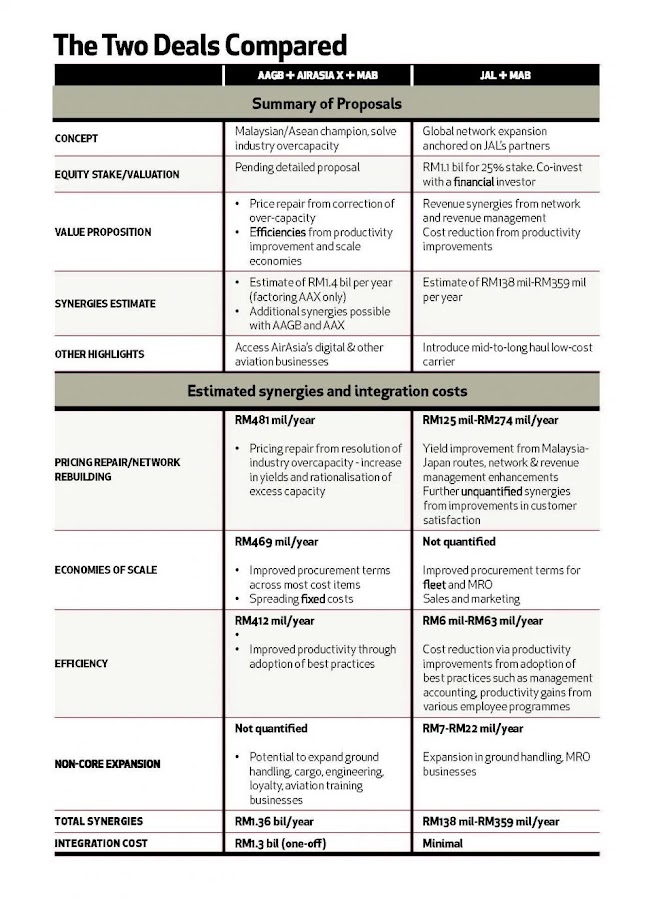 Meanwhile, Tan Sri Aziz Abdul Rahman, former managing director of MAS passed away on 22 January 2020 at the age of 87. It was reported that when he left MAS in 1991, it had a cash surplus of RM5 billion. According to a letter to MalaysiaKini (21 Jan 2020), the aggregate capital injected by the government to keep Malaysia Airlines afloat, either directly or indirectly, amounted to RM31 billion. In 2019 alone, the figure was RM800 million.