On March 10, 2021, Syahirah Syed Jaafar of theedgemarkets.com reviewed how top banks fared in 2020. Banks were impacted by low in­terest rates and increased provisions with loan moratoriums on their books. Many banks are now expected to perform better in 2021. This is with recovery in net interest income growth and a decline in loan loss provisioning.

The Edge took a look at some key finan­cial indicators of the top five banks in Ma­laysia for the financial year 2020 (FY20) and the results were as below.

Hong Leong Bank Bhd, whose FY20 ended on June 30, 2020, recorded a loan growth of 6.1%. CIMB Group Holdings Bhd meanwhile, was the only exception as it saw a decline of 1%. With 2020 behind, banks maintained a conservative stance moving into 2021, with their loan growth targeted this year of between 4% and 5%.

CGS-CIMB Research said it has low­ered its loan growth forecast on banks to between 2% and 3%, from 4% and 5% previously, after it lowered its gross do­mestic product (GDP) forecast to 5% from 7.5% previously.

Overall, loan growth for the month of January inched up to 3.8% from 3.4% in December, supported by the household and business segment. 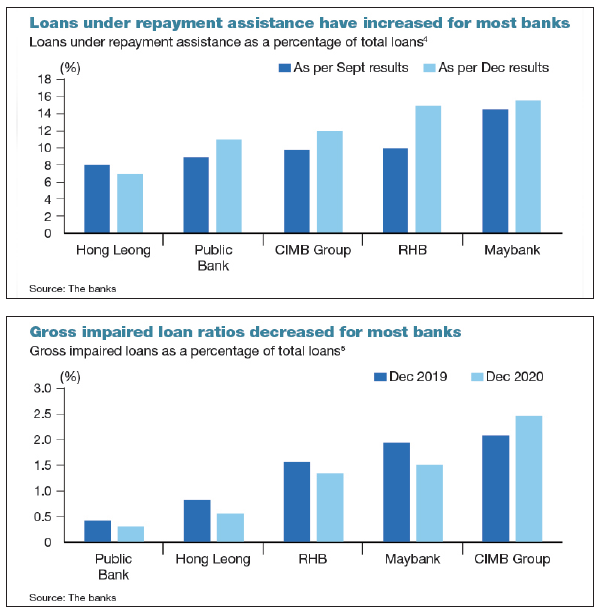 Higher provisions in FY20 did put a strain on banks’ asset quality. However, data shows that gross impaired loans (GIL) ra­tio actually decreased across most banks, except for CIMB Group, as it was affect­ed by exposure to the oil and gas sector

On average, it was noted that the five banks’ Common Equity Tier 1 capital ratio was stable at around 14.4% at year-end 2020, compared with 14.3% a year earlier; while the average loan-loss coverage ratio im­proved to 148% from 94%, as a result of efforts to front-load provisions.

The government’s Targeted Repayment Assistance scheme was announced in No­vember last year, to support borrowers whose repayment capacity was affected due to pandemic-related disruptions to their incomes.

Maybank, Public Bank, RHB Bank and CIMB each reported an increase in loans with reduced or deferred instalments — these are loans that benefit from pandem­ic-related repayment assistance.

The proportion of loans under assis­tance for these banks increased to 13% on average in February from 11% in No­vember 2020, said Moody’s. Meanwhile, Hong Leong Bank’s loans under assistance declined to 7% in Janu­ary, from 8% in November 2020.

It noted that the increase in loans un­der assistance is consistent with increased unemployment and underemployment re­ducing borrowers’ incomes.

Public Bank’s ROE of 11.2% is a spike compared to the rest of its peers, which could be explained by lower provisions incurred coupled with better performance in non-interest income, one analyst com­mented anonymously. 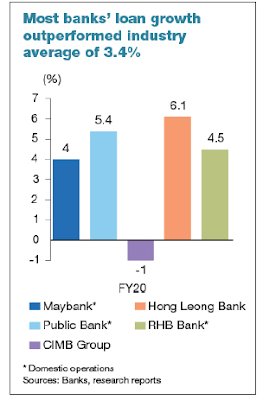 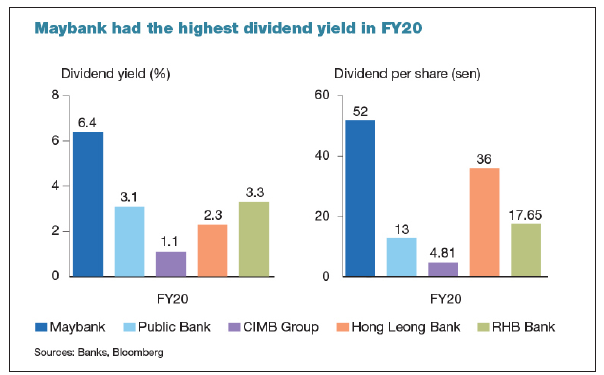 Meanwhile, CIMB reported the low­est among the lot of 2.1% in FY20, as it was affected by weaker performance in Indonesia, the analyst added.

A rough calculation shows that the average ROEs for Malaysian banks are currently at about 7%, however analysts are expecting this average to rise to nearly 9% by FY22.

Maybank’s dividend per share (DPS) in FY20 amounted to 52 sen, translating to a yield of 6.4% and the highest amongst its peers, while the rest saw a yield of be­tween 1% and 3%.

Banks are built on trust and conservative principles. In a crisis, they are the first to “fold” the umbrella – leaving many customers vulnerable. Thanks to BNM and Government intervention this has been minimised in Malaysia. Many customers had hoped for an extension of the loan moratorium by a further six months. But this was not to be! Why? Because banks must have objected vehemently.

Despite the above, the top banks are still reporting earnings of above RM1.0 billion – compared to losses incurred by SMEs in hotel, retail or tourism sectors. In fact, many SMEs, probably over 60,000 have folded-up. And Ambank still survives after paying the Government RM2.83 billion for blunders under 1MDB.

This present crisis is not a financial one, it’s a health pandemic that impacted Main Street and eventually the financial sector. Hence, banks are safe for now but I don’t understand why they are “mollycoddled” by the authorities. Perhaps they have good connections in high places?