The Tragedy of Suicide

Every 40 seconds, someone loses their life to suicide and nearly 800,000 people die due to suicide every year, according to the World Health Organisation (WHO). Suicide is the second leading cause of death among 15-29- year-olds after road injury, the WHO said. 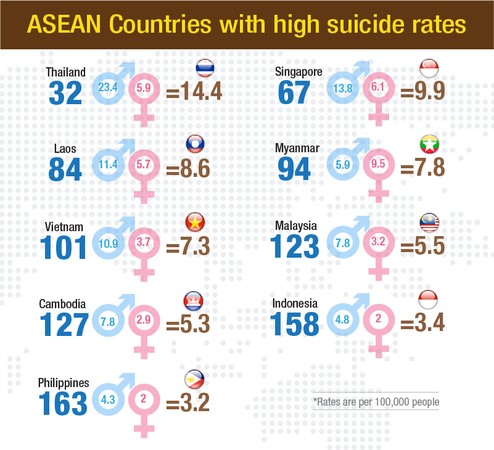 As the COVID-19 pandemic took its toll on millions of jobs in Thailand last year, Unyakarn Booprasert found herself penniless and with no friends or relatives who could help. This was reported by Neo Chai Chin and Gosia Klimowicz from CNA (18 March 2021).

The 59-year-old was splitting one packet of instant noodles between three meals. She was desperate for the 15,000 baht (S$655) promised by the government, to be paid over three months, under its No One Left Behind cash relief scheme.

When she learnt she was among the 15 million applicants who did not qualify for aid, Unyakarn decided to plead her case to Thailand’s authorities last April.

“When I got to the Ministry of Finance, sure enough, they didn’t listen,” said the cleaner. “From their actions, a poor person was similar to a pig or a dog, an animal with scabies.”

Unyakarn tried to kill herself with rat poison in front of the ministry’s building. “I wanted to protest. It didn’t happen only to me. It happened to many people,” she told the programme Undercover Asia.

“I thought that the government wanted to get rid of the poor in the country. So, I made their wish come true by getting rid of one person, one life.”

After her suicide attempt, the authorities investigated her case again and decided she qualified for the relief.

Suicides in Thailand have gone up amid the COVID-19 pandemic. A total of 2,551 people killed themselves in the first half of 2020, up 22 per cent from the same period in 2019. Health officials attributed the increase to pandemic-related stress.

Millions of Thais have lost their jobs amid the pandemic, especially those in the tourism industry where more than 500,000 workers have been laid-off in 2020 due to the economic impact of the coronavirus. Earlier this year, the Tourism Council of Thailand said that the country could see a million more jobless tourism workers in the first quarter of 2021.

It was reported that one in 13 workers in Thailand have lost their job.

With millions without incomes, suicide hotlines in the country have seen a spike in call volumes from those struggling in the pandemic. Panomporn Phoomchan, Director of charity group Samaritans of Thailand said that most calls are related to concerns about financial problems.

Unfortunately, the increase of suicide cases during the pandemic is not only exclusive in Thailand. Recently, Philippine media reported that suicide incidents in the archipelago rose by 25.7 percent in 2020 compared to the previous year.

Philippine Statistics Authority (PSA) data revealed that some 3,529 cases of intentional self-harm were recorded last year, compared to 2,808 recorded in 2019.

Groups particularly impacted by the pandemic’s fallout include tourism employees, sex workers and migrants. Foreign tourism, which makes up 12 per cent of Thailand’s gross domestic product, has collapsed as nations curb international travel to fight the spread of COVID-19.

Estimates put the number of sex workers in Thailand at anywhere between 800,000 to over two million. Rural-to-urban migrants have also faced difficulty getting aid under the No One Left Behind scheme, as they may be classified in government records as farmers, who come under a different financial scheme.

A similar spike in suicides occurred during the 1997 Asian financial crisis, when the numbers increased by about 20 to 25 per cent, said Varoth Chotpitayasunondh, spokesperson for the Ministry of Public Health’s Department of Mental Health.

Every suicide is a tragedy. But what can be done? There is a need for counselling and more counsellors. Governments and private NGOs could try to make this available to reduce the incidence of these tragedies. One life saved, is one life gained!