The Boston Consulting Group (BCG) in its recent study on economic forecasts point to a severe downturn anticipated by various banks and financial institutions for 2020. 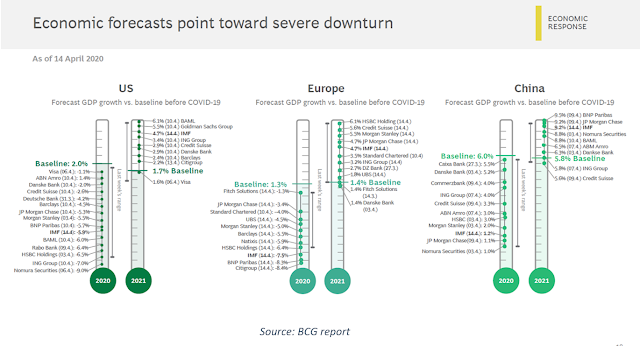 China, the global manufacturer, is expected to show growth between 1.0% to 5.0%, for 2020. BCG believes that the country would grow by 6.0% (again, seems to be rather optimistic). Banks and financial institutions forecast growth to be between 5.6% to 9.5%, the following year. BCG anticipates the country’s growth to be 5.8%. 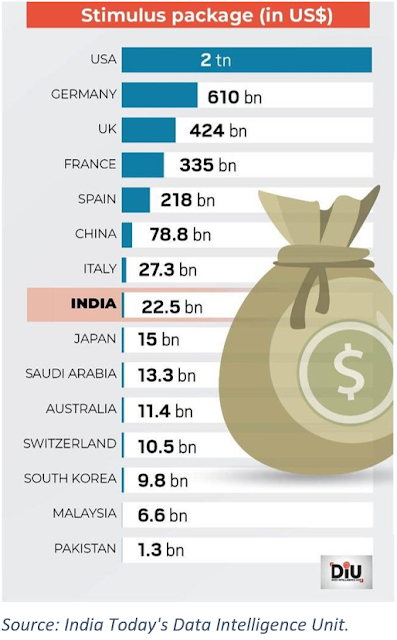 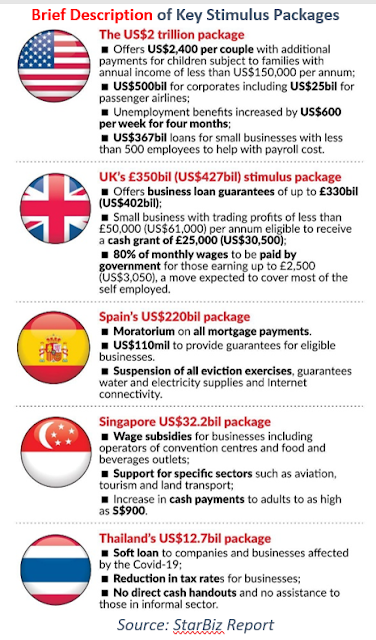 The United States has the highest stimulus package with $2 trillion. Of that, $500 billion is for corporations and $367 billion for small businesses with less than 500 employees.

The United Kingdom, on the other hand, is expected to pump in more than $420 billion into their economy. The government has offered to guarantee loans of businesses totalling up to $330 billion. The British government is also covering 80% of monthly wages for those earning £2500 or less. This is to help those who are self-employed.

Spain also has a massive stimulus package of $218 billion, of that, $10 million will be used to provide guarantees for eligible businesses.

Governments globally are trying to strike the balance between curbing the spread of the pandemic and saving their respective economies. With various travel restrictions in many countries, the tourism and aviation sectors are paying a heavy price.  An excerpt from BCG’s report (shown below) the United States, United Kingdom, Singapore, Australia and Hong Kong are trying to assist their respective aviation and small industries.

The United Kingdom is trying to salvage its aviation industry by framing a rescue package with Morgan Stanley’s assistance.

The Singaporean government is contributing 75% of the first $4600 of aviation worker’s salary every month. Besides that, it is also removing property tax and removing rent for cargo agents and ground handlers. 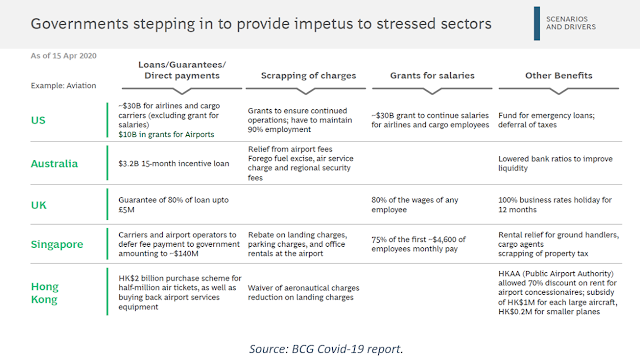 The small industries and services sector in the United States, has a $349 billion fund for employee retention. Loans applied (of up to $10 million) by the small businesses are 100% guaranteed by the federal government. Small businesses can also take a loan advance of up to $10,000 without mandatory repayment.

In the United Kingdom, the revenue and customs board (HMRC) will reimburse employers 80% of the salary costs. Apart from that, the government provides single grants of £10,000 and protection from eviction for small business owners. 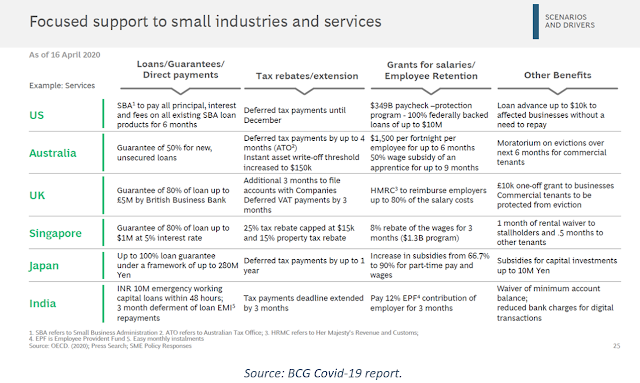 In a bid to save small industries in Singapore, the government will guarantee 80% of loans up to$1 million at 5% interest rate. Besides that, the city state is financing 8% rebate for 3 months which is valued at $1.3 billion.

Although not mentioned in the table, Germany has taken aggressive measures to curb the Covid-19 economic effect. For almost a decade, the country has been conservative on its spending, abiding in the “Schwarze Null” or “black zero” policy. This basically is a rule that insists on a balance between fiscal spending and tax receipt. The country’s fiscal package is €757 billion (increased from $610 billion quoted earlier). This includes supplying its development bank, KfW, with €100 billion for loans to public businesses, €400 billion (stability fund) to prevent corporate businesses from defaulting, €50 billion to fund small and medium enterprises and €10 billion for state aid work schemes to prevent unemployment.

So, what is Malaysia doing?

On April 6th, an additional RM10 billion stimulus for small and medium enterprises (SMEs) was allocated by the government. This raises the total direct fiscal injection to RM35 billion and constitutes 2.3% of GDP.
Based on the international comparisons above, Germany looks more comprehensive in their stimulus package to meet the Covid-19 crisis. In implementation as well, Germany is faster than other governments/ economies, which then will have a bearing on the speed of recovery. Malaysia may need to learn more from the German model.