Does The Yuan Tango With the USD?


It takes two to tango. Otherwise it is really clumsy or hilarious. But the gyrations between the Yuan and the U.S. dollar leave many in between with a bitter taste. 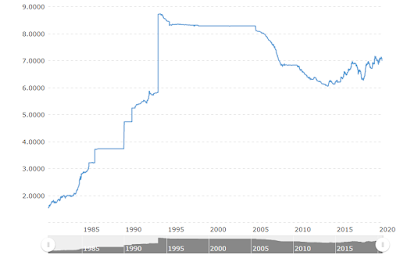 China’s rapid growth since the 1980s has been fuelled by massive exports. A significant part of these exports goes to the U.S., which overtook the European Union as China’s largest export market in 2012. China, in turn, was the United States’ second-largest trading partner until July of 2019, and its third-largest export market, and by far its biggest source of imports. The tremendous expansion in economic ties between the U.S. and China - which accelerated with China’s entry into the World Trade Organization in 2001 - is evident in the more than 100-fold increase in total trade between the two nations, from $5 billion in 1981 to $559 billion in 2013.

In 2018, The Trump administration, which has routinely accused China of manipulating its currency to boost its exports, launched a series of tariffs against Chinese imports. China retaliated with tariffs of its own on U.S. imports, and the world's two largest economies have ratcheted up trade tensions through the summer of 2019. On August 5th, 2019, China lowered the value of the Yuan below its 7 to 1 peg against the dollar in response to a new series of U.S. tariffs on $300 billion worth of goods set to go into effect Sept 1.

A cornerstone of China’s economic policy is managing the Yuan exchange rate to benefit its exports. China does not have a floating exchange rate that is determined by market forces, as is the case with most advanced economies. Instead it pegs its currency, the Yuan (or Renminbi), to the U.S. dollar. The Yuan was pegged to the greenback at 8.28 to the dollar for more than a decade starting in 1994. It was only in July 2005, because of pressure from China’s major trading partners, that the Yuan was permitted to appreciate by 2.1% against the dollar, and was also moved to a “managed float” system against a basket of major currencies that included the U.S. dollar. Over the next three years, the Yuan was allowed to appreciate by about 21% to a level of 6.83 to the dollar.

The true value of the Yuan is difficult to ascertain, and although various studies over the years suggest a wide range of undervaluation - from as low as 3% to as high as 50% - the general agreement is that the currency is substantially undervalued. By keeping the Yuan at artificially low levels, China makes its exports more competitive in the global marketplace. China achieves this by pegging the Yuan to the U.S. dollar at a daily reference rate set by the People’s Bank of China (PBOC) and allowing the currency to fluctuate within a fixed band (set at 1% as of January 2014) on either side of the reference rate. Because the Yuan would appreciate significantly against the greenback if it were allowed to float freely, China caps its rise by buying dollars and selling Yuan. This relentless dollar accumulation led to China’s foreign exchange reserves growing to a record $3.82 trillion by the fourth quarter of 2013.

China views its focus on exports as one of the primary means of achieving its long-term growth objectives. This viewpoint is backed by the fact that most nations in the modern era, notably the Asian Tigers, have achieved sustained increases in per-capita incomes for their citizenry mainly through export-oriented growth.

As a result, China has consistently resisted calls for a substantial upward revision of the Yuan, since such a revaluation could adversely impact exports and economic growth, which could in turn cause political instability. There is a precedent for this caution, going by Japan’s experience in the late-1980s and 1990s. The 200% appreciation in the yen against the dollar from 1985 to 1995 contributed to a prolonged deflationary period in Japan and a “lost decade” of economic growth for that nation. The yen’s steep rise was precipitated by the 1985 Plaza Accord, an agreement to depreciate the dollar to stem the surging U.S. current account deficit and massive current account surpluses in Japan and Europe in the early 1980s.

Overall, the effects of China’s currency policy are quite complex. On the one hand, the undervalued Yuan is akin to an export subsidy that gives U.S. consumers access to cheap and abundant manufactured goods, thereby lowering their expenses and cost of living. As well, China recycles its huge dollar surpluses into purchases of U.S. Treasuries, which helps the U.S. government fund its budget deficits and keeps bond yields low. China was the world’s biggest holder of U.S. Treasuries as of November 2013, holding $1.317 trillion or about 23% of the total issued. On the other hand, the low Yuan makes U.S. exports into China relatively expensive, which limits U.S. export growth and will therefore widen the trade deficit. As noted earlier, the undervalued Yuan has also led to the permanent transfer of hundreds of thousands of manufacturing jobs out of the U.S.
A substantial and abrupt revaluation in the Yuan, while unlikely, would render Chinese exports uncompetitive. Although the flood of cheap imports into the U.S. would slow down, improving its trade deficit with China, U.S. consumers would have to source many of their manufactured goods - such as computer and communications equipment, toys and games, apparel and footwear - from elsewhere. Yuan revaluation may do little to stem the exodus of U.S. manufacturing jobs, however, as these may merely move from China to other lower-cost jurisdictions.

Cooler heads need to prevail when addressing this burning issue, as the worst-case scenario would be an acrimonious trade war between the world’s two biggest economies. The most likely outcome going forward is one of gradual appreciation of the Yuan, accompanied by measured dismantling of currency controls as China moves toward a freely convertible currency. So it may be a few years before the Yuan terminates its tango with the greenback and then heads out on its own.