International trade in goods is expected to continue to nosedive in the coming months. New UNCTAD data published on 11 June show that merchandise trade fell by 5% in the first quarter of the year and point to a 27% drop for the second quarter and a 20% annual decline for 2020. 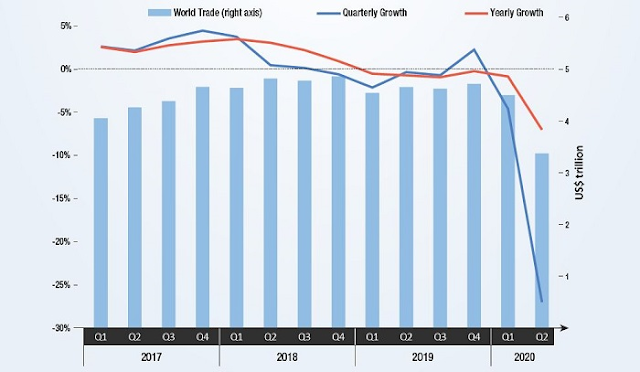 Preliminary data for April suggests the sharpest downturn for South Asia and the Middle East, which could register trade declines of up to 40%. Meanwhile, the East Asia and the Pacific regions appear to have fared best, with trade drops remaining in the single digits both in the first quarter of 2020 as well as in April.

China appears to have fared better than other major economies in April, registering 3% growth for exports. But the most recent data indicates that the recovery may be short-lived, as the nation’s imports and exports fell by about 8% in May.

The report shows that economic disruptions wrought by COVID-19 have affected some sectors significantly more than others.

In the first quarter of 2020, textiles and apparel declined by almost 12%, while office machinery and automotive sectors fell by about 8%. In contrast, the value of international trade in the agri-food sector, which has so far been the least volatile, grew by about 2%.

On the other hand, office machinery appears to have rebounded in April, largely because of China’s positive export performance.

Almost every category is expected to suffer a fall in trade over coming months.

A notable side effect of the COVID-19 pandemic has been the increase in demand for medical goods and equipment, such as ventilators, monitors, thermometers, hand sanitizers, protective masks and garments.
While the international trade of such goods contracted at the onset of the pandemic, it rebounded in February and March and almost doubled in April 2020, as countries scrambled to secure medical and protective equipment.

Likewise, the country’s import also suffered the worst drop since January 2009, falling by a staggering 30% to RM52.3 billion from a year earlier, according to the Department of Statistics Malaysia (DOSM). 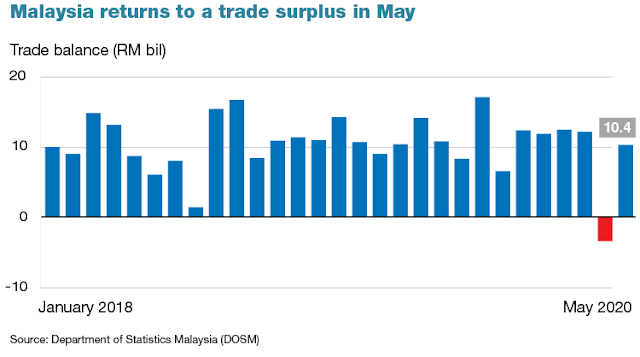 While the trade balance returned to a surplus of RM10.4 billion in May 2020, said the DOSM. This is after registering its first monthly deficit, in over 22 years since October 1997 of RM3.5 billion, in April 2020.

We need to brave for more of the same in the months to come, if it is a U-shaped recovery.