Why Should UEM Sunrise Merge with EcoWorld?

The proposed merger between Eco World Development Group Bhd (EcoWorld) and UEM Sunrise Bhd favours the latter, according to Kenanga Investment Bank Bhd (“Kenanga”), given that EcoWorld’s key shareholders would lose their majority rights, listing status and potentially their brand. 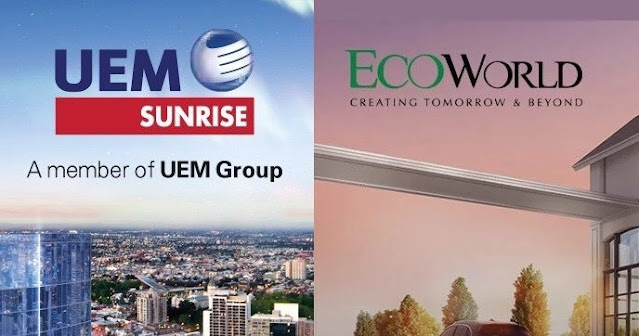 On EcoWorld’s side, Kenanga said a potentially strong reason for the merger may be that its key shareholders are concerned over the outlook for the property sector and economy for the foreseeable future, and therefore the group could benefit from the backing of a stronger shareholder in the form of Khazanah Nasional Bhd via UEM Group Bhd.

This would help EcoWorld in the event that it needs to raise funds via equity. Eco World's net profit reportedly fell 72.7 per cent to RM13.8 million in the third quarter (Q3) ended July 31, 2020 from RM50.5 million a year ago.

This was due to the lower share of the results of its Malaysian joint-ventures namely Eco Grandeur, Eco Business Park V, Eco Horizon, Eco Ardence and Bukit Bintang City Centre.

According to a recent report by CGS-CIMB Research, Eco World's net gearing stood at 0.75 times as at financial year 2019.

Its revenue plunged 88.8 per cent to RM111.96 million from RM1 billion. Khazanah Nasional Bhd fully owns UEM Group, which has 2.99 billion shares in UEM Sunrise for the 66.06 per cent stake.

Also, UEM Sunrise on the other hand has been struggling with many issues, the merger of UEM & Sunrise (again the deal initiated by the Khazanah for Datuk Tong Kooi Ong – the owner of The Edge) has never really bedded down properly. Two different cultures coming together, with skills mismatch. And Tong said of the merger “Tong says the merged company is expected to have a market capitalisation of RM10 billion, with various segments from construction to property development to hospitality”. What is the market capitalization of UEM Sunrise now? RM 10 bil? RM 25bil?

It is only 17% of what was promised, current market cap is onlyRM1.7 bil. If we put both UEM Sunrise & Ecoworld together as one, you have one giant property company, massively leveraged (by state banks), in an industry that will see no growth for next few years. UEM Sunrise board commissioned a study, which was done by Bain & Co, and it was suggested that the best partner for UEM Sunrise was either MRCB or Sime Property.

Why can’t there be a better way forward? Instead of relying on Khazanah or a GLC, it is time for overseas parties (or a white or blue knight) to acquire EcoWorld and the Government provides incentives or approvals for the acquisition. Leave UEM Sunrise to sort out its own issues!