How Can Ant Rise Again? 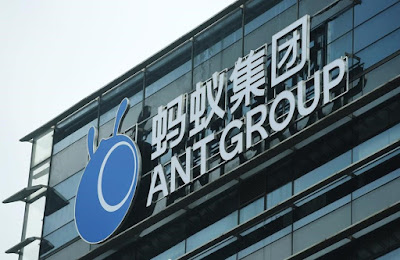 The Chinese Government decided to suspend the largest IPO of all time – Ant’s $37 billion offering on the Shanghai and Hong Kong exchanges. What happened?

The powerful combination of finance and technology got it into trouble. The dangerous business model creates the risk, both to the company and the country’s financial system.

Beijing’s long-term goal is to roll out a central bank supported cryptocurrency. According to Andy Mukherjee from Bloomberg, the rise of fintech in areas such as money-market funds and wealth management has led to risk accumulating in shadow banking. One of the government’s strategies behind a digital token is to level the playing field back towards traditional lenders, who have been trailing technology in other ways. In addition, Ant may have to embrace this virtual yuan-backed currency. Another goal is to expand the surveillance state, where data may show every aspect of daily life.

Tim Culpan of Bloomberg Opinion suggested how Ant can rise again after the IPO suspension. Since regulators outlined new draft rules for the sector that include Basel-style capital requirements, Ant would need to provide at least 30% of the funding for loans it makes. That figure is currently closer to 2%, with the capital requirement equal to around $14 billion, according to estimates by Jefferies analysts Shujin Chen and Alfred He. While possibly a slight drag on profit, this shouldn’t trouble Ant, given the IPOs were set to raise 2.5 times that number.

Ant may also provide regulators with greater access to its data. This helps to prove that its model can better manage risk while explaining them how things are done. In return, Beijing will have greater access to information it can use to build a broader model of the economy and its citizens.

A final change is likely to be Jack Ma himself. Companies often talk about key-man risk in terms of how the business may suffer if the linchpin executive departs. For Ant, this problem is reversed: Ma hanging around could be the liability.

China’s second-richest man had already stepped away from Alibaba after taking too much of the spotlight away from political leaders. He no longer has any official position at the e-commerce behemoth. Yet he holds voting control and a significant stake in Ant. As with Alibaba, Ma is likely to put his vast holdings into a philanthropic trust, set up charities and think tanks, and retire from public life.

With these, Tim believes that Ant could then re-emerge from its IPO ashes like the patriotic fintech phoenix that Beijing ultimately wants.