Bitcoin extended its recent run-away rally, breaching US$33,000 for the first time ever on 1st January 2021. The digital currency advanced more than 300 percent in 2020. The latest leg has added more than 50 per cent since crossing US$20,000 just weeks ago.

Bitcoin is now being perceived as an inflation-hedge and an asset with a potential to give quick returns. Bitcoin has outperformed safe havens like gold and the SP500. 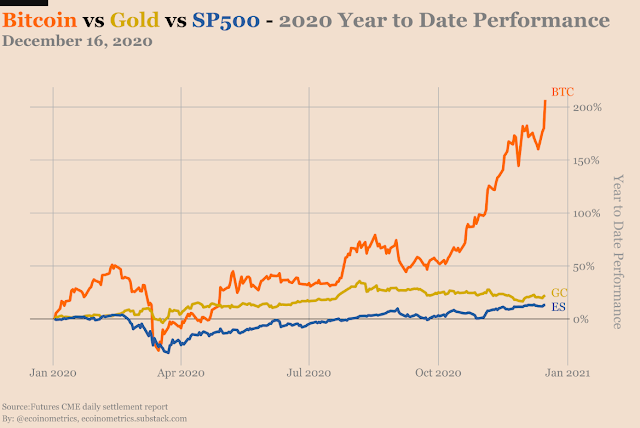 "It's very likely that the Bitcoin will eventually pass US$100,000 per coin," Sergey Nazarov, cofounder of Chainlink, a global blockchain project. "People have been steadily losing faith in their currencies for years, and the monetary policies resulting from the economic impact of the coronavirus have only accelerated this decline."

However, Hitesh Jain, vice president of Yes Securities Ltd.’s Research does not think so. “Ultra- cheap money pumped in by global central banks has found its way into many assets, including bitcoin. We are in a scenario where safe-havens and riskier assets are all rallying simultaneously, which is a theoretical contradiction. So much so that even negative-yield bonds are garnering inflows. It has become like hunting with the hounds and running with the hare."

Some analysts in the bearish camp also drew parallels between the current bitcoin rally with that of 2017. They said a crypto rally, which sees allocation shift from safer to riskier assets, is often followed by a deep correction. In 2017, bitcoin had rallied from the low of around $790 to a peak of $19,041 in December. Interestingly, in a December 2017 BofA survey, bitcoin topped the list of most crowded trades. In 2018, it crashed by 74%. 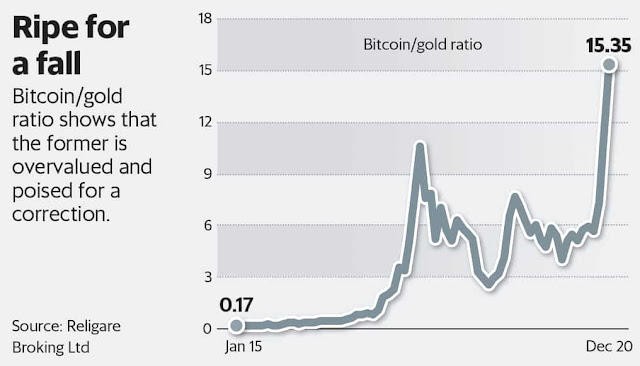 Another indicator that is flashing red is the bitcoin-gold ratio, which has risen from the levels of 1.1 to 15 in recent months. “Since both gold and bitcoin have finite supply, the bitcoin-gold ratio gives us a sense about which of the two is overvalued. Data shows that the former is poised for a correction," said Sugandha Sachdeva, vice-president, metals, energy and currency research, Religare Broking Ltd.

Foreign research house Jefferies has, for the first time, included bitcoins in its asset allocation for pension funds. It has cut allocation to gold by 5% in favour of bitcoin. Whether Bitcoin is worth to invest, it is up to your perception. Is Bitcoin undervalued or is it just a bubble? What we are sure is that both Bitcoin and gold are true havens from the ever-weakening fiat currency fiasco unfolding in the Covid and soon to be post-pandemic world. Gold fits the bill, but Bitcoin may fit the future better.

3.     Harsha Jethmalani, 2020 was great for bitcoin but experts are wary of a correction, https://www.livemint.com/