The Century of Humiliation and the Chinese Mindset

Xi Jinping describes the century of humiliation from August 29th ,1842 to the establishment of People’s Republic of China in 1949. The defeat of China to the British Empire, was the First Opium War. Hong Kong was ceded and five treaty ports opened to international key trade. Beyond that were the following events: 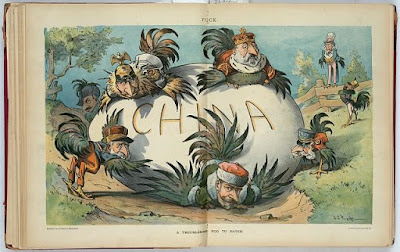 In almost all the wars China fought, it was forced to give concessions to the victors, including reparations, opening up ports for trade, lease or cede territories and make other concessions to foreign “spheres of influence”.

Jane E. Elliott criticized the allegation that China refused to modernize or was unable to defeat Western armies as simplistic. China embarked on a massive military modernization in the late 1800s. Buying weapons from Western countries and manufacturing their own arsenal. In addition, Elliott questioned the claim that while Chinese society was traumatized by the Western victories, many Chinese peasants (90% of the population at that time) living outside the concessions continued about their daily lives, uninterrupted and without any feeling of "humiliation".

Historians have judged the Qing dynasty's vulnerability and weakness to foreign imperialism in the 19th century to be based mainly on its maritime naval weakness. It achieved military success against Westerners on land as the historian Edward L. Dreyer said. "China's nineteenth-century humiliations were strongly related to her weakness and failure at sea. At the start of the First Opium War, China had no unified navy and not a sense of how vulnerable she was to attack from the sea. British navy forces sailed and steamed wherever they wanted to go. In the Arrow War (1856–60), the Chinese had no way to prevent the Anglo-French navy expedition of 1860 from sailing into the Gulf of Zhili and landing as near as possible to Beijing. Meanwhile, new but not exactly modern Chinese armies suppressed the mid-century rebellions, bluffed Russia into a peaceful settlement of disputed frontiers in Central Asia, and defeated the French forces on land in the Sino-French War (1884–85). But the defeat at sea, and the resulting threat to steamship traffic to Taiwan, forced China to conclude peace on unfavourable terms."

As China and its international presence grow, greater insight into how China views the world is needed. The West may have forgotten the Opium wars and the burning of the Summer Palace, but the CCP has not.

In recent years, the Century of Humiliation has also been invoked under the current Sino-American trade tensions. This has seen the comparison of the recent American demands to the unequal treaties previously imposed upon China to further nationalist sentiment and to unify China. Alongside the perception that the tensions are an American move to prevent China’s rise, this has been a tool to further China’s resolve, which has been underestimated by Washington.

The Century of Humiliation has been an important part of China’s international relations and has shaped China’s perception of its role. It has also been both the driving force in China’s push for greater status and a means to further Chinese foreign policy objectives. The results of which can be seen globally. China’s ascent demonstrates how the legacy of China’s humiliation continues to have wide-reaching consequences for everyone.