Haiti and Its Cost of Freedom

The Haitian Revolution was one of the largest and most successful slave rebellions in history. Over 12 years of uprisings formerly enslaved Africans overcame colonial rule. This ended slavery in France’s most profitable colony and established the first independent black republic in the Americas.

In the 18th century, the white population made up 40,000 of Saint-Domingue’s residents. The slave population was close to half a million – outnumbering them 10 to one. The slave rebellion in 1804 gained Haitian independence from France. The French government however demanded compensation for the loss of their property and slaves. In fear of invasion, Haiti agreed to pay back a sum of 90 million gold francs over the following 122 years. Haiti, in effect, was forced to pay reparations for its freedom.

This history is not as distant as it may seem. It set the stage for many decades of Haitian economic misery and underdevelopment to come—the country, one of the poorest nations in the Western hemisphere, did not finish repaying its 19th century debts to France and the U.S. until the middle of the 20th century. 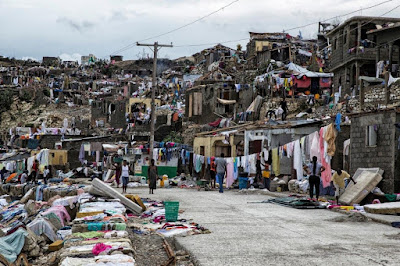 In 2004, the President at the time Jean-Bertrand Aristide suggested that France should repay $21 billion in reparations for this money extorted after independence. Soon after making this suggestion, the democratically elected president Aristide was overthrown by a military coup supported by the USA.

While France belatedly offered a public apology for the history of slavery that shaped the Caribbean, and cancelled Haiti's $77 million debt following the cataclysmic 2010 earthquake, the country remains impoverished and vulnerable to disasters and climate change. Loans have continued to be given, and the IMF ranks Haiti as at high risk of another debt crisis. Activists say that the indemnities unjustly forced on Haiti more than a century ago must be reversed. Some calculate that returning all those 19th century gold francs would add up to about $17 billion.

The resulting racial wealth gap is no metaphor. In metropolitan France, 14.1% (2017) of the population live below the poverty line. In Martinique and Guadeloupe, in contrast, where more than 80% of the population is of African descent, the poverty rates are 38% and 46%, respectively. The poverty rate in Haiti is even more dire at 59% (2014). And whereas the median annual income of a French family is $31,112, it’s only $450 for a Haitian family (source: https://en.wikipedia.org/wiki/Median_income).

In May 2015, when French President François Hollande became only France’s second head of state to visit Haiti, he admitted that his country needed to “settle the debt.” He then clarified that it was a “moral” debt, not a financial one. "No negotiation, no compensation can repair the wounds of history that still mark us today," Haiti's President Michel Martelly told French President Francois Hollande. "Haiti has not forgotten, but Haiti is not stubborn."

Meanwhile, Haiti wallows in misery while France ignores its financial obligation. Why can’t people see the injustice especially the French who uphold their national motto of liberty, equality and fraternity?

1.     Haiti: Free from slavery, not yet free from debt https://jubileedebt.org.uk/

4.     Lucy Campbell, Ten black history events that should be taught to every pupil, 11 Oct 2020, The Guardian