However, Sven Schneider, chief executive of the European Chamber of Commerce, said in response to Tengku Zafrul’s post that European foreign investors have many concerns about Malaysia being a “viable investment destination”. “Until today, the Honorable Minister was not even able to meet with us and listen to the concerns of our corporations,” Schnieder said. “Without these inputs, your Ministry certainly cannot address the problems on the ground.”

There’s been much hype and agitation and, by extension, circulation of kopitiam (coffee shop) talk about reports of Malaysia falling behind its regional counterparts in terms of foreign direction investment (FDI). According to a United Nations Conference on Trade & Development (UNCTAD) report, “Investment flows to developing countries in Asia could fall up to 45 percent in 2020”. The report also highlighted that Indonesia, Singapore and Vietnam received more than 80 percent of the US$156 billion in FDI that ASEAN countries pulled in last year. Only five percent or just US$7.8 billion went to Malaysia – which of course doesn’t seem to augur well for the country.

Some of the specific examples include:

(1)  Samsung Electronics is intending to shift its display production operations from China to Vietnam – but which has actually been officially denied by the company itself. For the record, Samsung already has six factories and two research and development (R&D) centres in Vietnam;

(2) Apple through its manufacturing partner, Foxconn, is moving only some (i.e., not wholesale) of its iPad and MacBook assembly lines to Vietnam from China as part of a “parallel supply chain” strategy. This means that there’s scope for other regional countries such as Malaysia to attract the rest of this production network in the global value chain (GVC);

(3)  Tesla is building a factory in Indonesia and even contemplating a SpaceX launchpad too – when in reality talks between the electric vehicle and clean energy company with the Indonesian government is still on-going;

(4) Amazon is investing US$2.8 billion to build a localised data centre (Amazon Web Services/AWS Region consisting of inter-connected clusters known as Availability Zones) for its cloud computing services in West Java, Indonesia. Data localisation would also minimise the potential for aggressive tax avoidance (transfer pricing) for companies such as Amazon. But should Indonesia decide to go ahead and join the Comprehensive and Progressive Trans-Pacific Partnership (CPTPP), the advantages gained from data localisation will be diluted. This is because the CPTPP has an in-built bias against data localisation and corresponding tax implications alongside intellectual property rights (IPR); and

(5)  Alibaba, Bytedance, Tencent, are setting-up their regional headquarters in Singapore. This has no bearing at all on the investment in Malaysia’s digitalisation drive, including assimilation of 5G technology, among others. It should be recalled that Alibaba had co-invested in the establishment of what is the world’s first Digital Free Trade Zone (DFTZ) in Malaysia 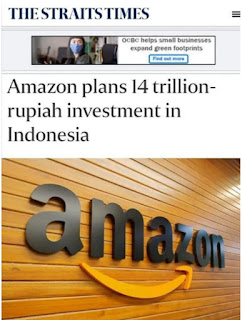 A new policy vision is called for in which the existing policy paradigm is turned on its head (Jason Loh, The Asean Post, 9 January 2021). SMEs have to be at the forefront as catalysts of economic and employment growth. That would also benefit the government-linked companies (GLCs).

Other policy steps would include the resuscitation of cross-border listings such as the ASEAN Trading Link (set up in 2012) by building upon the ASEAN Capital Markets Forum (ACMF) for cross-border offerings of collective investment schemes (CIS).

Thirdly, increase fiscal deficit to invest in DDI, including in research & development (R&D) and generate a job creation strategy at the heart of Malaysia’s macro-economic strategy.

Beyond economics and incentives is political instability, racial and religious rhetoric and unnecessary grand standing by politicians from another era. If we focus on innovative, imaginative ways to attract DDIs and FDIs then we have a chance to be ahead of Vietnam or Indonesia.

Now we have an emergency declared by the King, that’s the confidence of our present PM. God Bless Malaysia!