Is Climate Change Not Happening?

Americans of all stripes generally trust scientists (86%), except for environmental research where there is a 30-point gap between Republicans and Democrats, a gap – more surprisingly is persistent among those with high science knowledge. 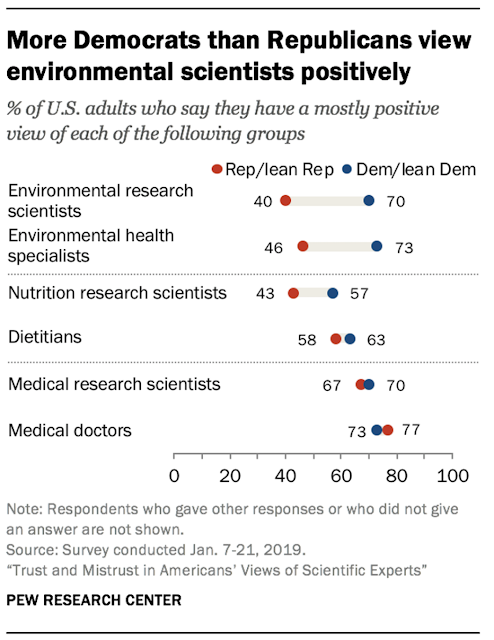 Besides individuals, it was estimated that the world's five largest publicly owned oil and gas companies spent about US$200 million a year on lobbying to control, delay or block binding climate policy.

This raises the question: Why are people denying climate change? Mark Maslin explained five types of denial in his article:

Deniers suggest climate change is just part of the natural cycle, the climate models are unreliable and too sensitive to carbon dioxide. Some suggest that CO₂ is just a small part of the atmosphere and cannot have a large heating effect.

All these arguments are false and there is a clear consensus among scientists about the causes of climate change. The climate models that predict global temperature rises have remained very similar over the last 30 years despite the huge increase in complexity, showing it as a robust outcome of science.

Some climate change deniers are switching to new tactics. One of Britain’s leading deniers, Nigel Lawson, the former UK chancellor, now agrees that humans are causing climate change. But what he was concerned about was the cost and other implications of many of the policies currently being advocated.

Economists, however, suggest we could fix climate change by spending 1 percent of world GDP. Perhaps even less if the cost of savings from improved human health and expansion of the global green economy are considered. But if we don't act now, by 2050 it could cost over 20 percent of world GDP.

Climate change deniers also argue that climate change is good for us. They suggest longer, warmer summers in the temperate zone will make farming more productive. These gains, however, are often offset by the drier summers and increased frequency of heatwaves in those same areas. For example, the 2010 "Moscow" heatwave killed 11,000 people, devastated the Russian wheat harvest and increased global food prices.

For example, 25 percent of the human-produced CO₂ in the atmosphere is generated by the US, another 22 percent is produced by the EU. Africa produces just under 5 percent.

The deniers also argue that we should not rush into changing things, especially given the uncertainty raised by the other four areas of denial above. Deniers argue that climate change is not as bad as scientists make it out. We will be much richer in the future and better able to fix climate change.

People once denied that climate change is happening, and now they are denying that humans are responsible. The question is why are we allowing people with the most privilege and power to convince us to delay saving our planet from climate change? And what do we do as Malaysians?

1.     Why is climate scepticism so successful in the United States? 21 Jan 2020, The Conversation